Remember folks, the deadline for submissions to No Safe Harbor 2 is this Saturday. Any length from 500 words up (or indeed artwork or other book-suitable material) is welcomed. As long as it relates to one of the three Pirate Planks:

No Safe Harbor 2 - One Month and Counting

Only one month to go for submissions to No Safe Harbor 2.

If you’ve got a piece that you want to submit, tell us about it now, so we know to expect you!

The deadline for submissions for No Safe Harbor 2 (NSH2) is starting to get closer. 7 1/2 weeks is all that's left until the September 1 deadline. For those still wondering about what is needed, and what's suitable, here's a quick rundown.

We are happy to announce the opening of submissions for No Safe Harbor 2, currently set for release December 1, 2012. Just like the last book, we are going to have the following three sections in the book:

The deadline for submissions is set for September 1, 2012.

Please send submissions and other ideas to brad.hall@pirate-party.us. Oh, and just like the last book, we would like to have some comics in it as well.

We already have a few essays being worked on. Those are:

An essay on education in Florida
An essay about mashups and remixes
A piece on using TOR, haystacking, and other anonymizers online

We're planning for this book to be written by Pirates for Pirates, so if you consider yourself a Pirate (anywhere in the world), please contact us about getting in this book. Just like the last book, we plan on having it available in several digital formats and in paperback form.

Thank you, and rock on.

Well, it seems that No Safe Harbor has been very popular. So much so, that we’ve decided we’re going to do another one. With a planned release date of December 1, 2012, it would be a perfect gift for your loved one.

As before, we’re going to keep it to the three main areas of Pirate Party policy:

We will be releasing the details of how to submit for consideration later, but as a rough timetable, we expect the cutoff for submissions to be around September 1 2012, so that we can get the book prepped and out by December 1st. 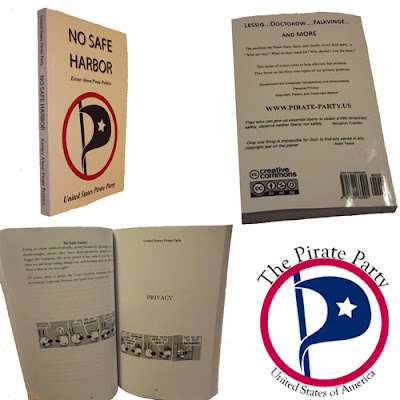 We are pleased with the amount of publicity No Safe Harbor has gotten. Thank you, keep spreading it around.

That said, we plan on releasing No Safe Harbor 2: Still No Safe Harbor later this year. We will take into account all of the comments and concerns we have received from the first book and put that toward making the next one better than the original.

We plan on keeping the same three sections in the next book, those being Government and Corporate Transparency and Accountability, Personal Privacy, and Copyright, Patent, and Trademark Reform.

We also want to include more, varied, comics.

That's where you come in.

Ever since the beginning of the Pirate Party, we have used a boat metaphorically to describe the United States. You are all on this boat. It is your pirate voice that should be at the forefront of this series.

To that end, we ask you, all of the people on this boat, to participate. Do you have an idea for an essay? Even if you yourself aren't capable of writing it, submit your idea. We'll see if we can work with you on it.

Here's a few of the ideas we would like to see in the next book:

And if it's not listed, but you have an idea, let us know.

And of course comics that mention these topics as well.

The editor of the No Safe Harbor series can be reached at brad.hall@pirate-party.us or you could comment in this thread.
Posted by Brad Hall at 12:33 PM 20 comments:

Woohoo!
No Safe Harbor has received a great deal of attention during its first week! Thank you to everyone who has downloaded, shared, and linked to the book. Over 10,000 downloads and we've only just started!
We're also stoked to see so much interest from around the globe, with the book being downloaded in over 60 countries (Can't ALL be proxies, right?). No hits from Antarctica yet, but we're working on that...
Much to our delight, 67 physical copies of the book have already been ordered from Amazon as of this moment - this is very exciting; No Safe Harbor is a huge milestone for the US Pirate Party and a great deal of work went into ensuring everything was perfect for both the hard copy and the eBook.
If you have reviewed the book, know of a review of the book, or plan to write a review of the book, please submit them to us. We can't wait to hear all of your feedback and include it in the next volume! Oh, yes, there will be more.
We would like to once again thank everyone who contributed to the book; the authors who shared their work, the editors who painstakingly formatted and corrected, the persistent previewers, and all the other individuals who put volunteered their time to make this book a reality.
First Week Statistics (1/24-1/31)
Summary:
10,708 clicks on website links to the book (Includes those from reposted links)
19,700 unique hits on this website (www.nosafeharbor.com)
67 copies of the book sold via Amazon
Direct Downloads by Source:
Breakdown by Country:
Torrents:
Of the 10,708 clicks, 1,030 have been clicks for the torrent.
The Canadian Pirate Party tracker shows 885 full complete downloads of every file on the torrent, and around 150 partial downloads.

In addition, the OpenBitTorrent tracker (via The Pirate Bay) shows another 162 full downloads.

We'll keep updating these numbers - there are still many people who don't have a copy yet, so who knows what could happen!
Thank you for sharing!
Posted by K`Tetch at 11:15 AM 23 comments:

Does anyone have any reviews of No Safe Harbor they've written, or found on the web? 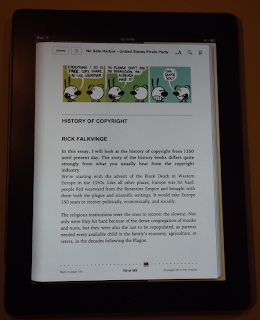 The normal site for No Safe Harbor has been taken down thanks to the massive traffic influx from Slashdot and elsewhere.

WOW guys, amazing! Thank you for the great response!

We're working to get it up ASAP, but we got this temporary site up in the meantime.

Here's a list of links for the book while you're waiting.

FOR IMMEDIATE RELEASE - Jan 24 2012The Pirate Party is proud to announce the release of its first book, No Safe Harbor.No Safe Harbor, released January 24th 2012, is a collection of political essays, texts, and discussions that help explain and educate about Pirate Party positions. While some have been published before, many others are original to the book.Contributors range from first-time writers being published for the first time, leading academics, to Pirate Party officials, and even international organizations like the United Nations.Adding color to the book are cartoons by artist and free culture activist Nina Paley, creator of the animated film Sita Sings the Blues.Topics covered include notes on the 4th Amendment, the history of copyright, biopatents, and corporate personhood.The book is released under a Creative Commons license (CC-BY-NC-SA) and sharing of it is strongly encouraged. To further that, the book is available in a number of DRM-free formats, free of charge. In addition a paperback edition can be purchased through Amazon.com for $9.99"For anyone concerned with our rights today, but unsure where to start, this book is an invaluable guide," says Assistant Editor and contributor Andrew Norton. "Education on these very important topics, and their immense potential for harm, has been sadly overlooked in recent years. We felt it was time to correct that."Further information, including the book and press resources can be downloaded fromwww.nosafeharbor.com###About the US Pirate PartyThe US Pirate Party was founded in 2006. Its aim is to bring transparency and accountability to government, while restoring personal liberties and privacy that have been discarded in a panic since 2001. It also seeks to bring copyrights and patents back to their Constitutional mandated purpose of promoting the progress of science and the useful arts.The Pirate Party is currently recognized in Massachusetts and Florida. Efforts to gain recognition in the entire country is underway.Contact:press@nosafeharbor.com+1 352-658-3824Twitter: @nosafeharbor
Posted by K`Tetch at 4:46 AM